By Dana Ryan, Senior Manager of Sport Performance and Education, Herbalife Professional BMX rider Carlos Mario Oquendo has been on the bicycle racing fast track for a long time. “My dad was really interested in riding bicycles,” says Oquendo. “He…

Read more on Carlos Mario Oquendo: BMX Racer Speeds onto World Stage with Good Nutrition at I Am Herbalife. 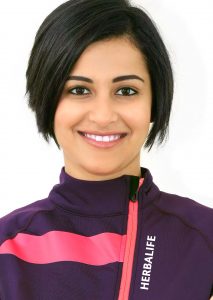 Heena Sidhu may hold a degree in dentistry and express her artistic side through painting and sketching, but the Herbalife-sponsored athlete from India is known throughout the world for her excellence in an entirely different and unique endeavor: pistol shooting.

Highly accomplished in her sport, Sidhu is the current world record holder in the 10 meter air pistol event and was the first Indian pistol shooter to be ranked number one in the world in 2014. Her strong interest in shooting at an early age came as no surprise, as her father was a national level shooter in India and her uncle was a gunsmith. She started out shooting for fun, but as her interest in the sport grew and she progressed, her family helped motivate her to take her interest to the next level. Her uncle, one of her biggest supporters, even helped her to fine-tune her equipment so that she could perform at her very best. Though competitive pistol shooting has not gained widespread popularity yet, according to Sidhu, there are many opportunities for the sport in India. “Shooting is gaining a lot of attention and growing at a good rate here,” she says. “Plus, the consistent achievement of the Indian Shooting Team in both the national and international arena ensures that the sport gets its due recognition. Shooting is also a top priority for the government of India and with many private sponsors funding the training of talented shooters, things are better than ever before.” However, for anyone who thinks they can simply pick up a pistol and master the sport, they better think again.

“There are unique challenges to pistol shooting, from both a physical and mental perspective,” says Sidhu. “Though it may come across as an easy sport – just stand, aim and shoot – being able to hit a small target at a distance of more than 30 feet while under pressure is challenging. Your muscles need to be strong and have the endurance to hold your body and your gun still. You need to be able to find a mental zone in which you can focus and make the shot you need without outside distractions. And you need to do it in repetition.” In need of both physical and mental stamina to perform at her best, Sidhu focuses on full body conditioning when training, with added focus on core and back work, which is critical to her stability. Stretching is also very important to keep her muscles supple. As for the mental aspect, “I work with a sports scientist and we do a lot of breathing exercises, which helps me take in more oxygen and stay calm in stressful situations,” she says. “I also work on being able to multitask, as taking a good shot involves aligning many different elements of the shot simultaneously. Aim, stability, breath, trigger manipulation and much more all need to come together for a great shot.”

As any athlete competing at the highest level of their sport would, Sidhu pays close attention to what she consumes. “Nutrition is critical to my performance, to get the desired results from working out and to allow my body to recover in time for the rigors of the next day,” she says. So what made her choose Herbalife® products? “I had long been aware of the Herbalife commitment to providing quality nutrition to athletes. Then I got to experience the benefits first hand, in both training and recovery. Also, when traveling, I noticed a big impact on my diet – Herbalife provides me with the macro and micro nutrients I need to stay healthy and energized.” Sidhu takes Herbalife® Formula 1 Healthy Meal Nutritional Shake Mix with an extra scoop of Herbalife® Protein Drink Mix post-workout and as a meal replacement when she’s traveling. She also uses Herbalife® Formula 2 Multivitamin Complex and Herbalife® Afresh Energy Drink Mix (available exclusively in India and similar to Herbalife® N-R-G Nature’s Raw Guarana Tea), the later especially after intense training sessions in hot weather. “My goal with Herbalife is to build and maintain a long-term partnership where we help each other excel in our fields of expertise,” she says. “I want Herbalife to help me be fit so I can compete for longer and I want to give Herbalife my feedback so they can continue to evolve and help top athletes to succeed. Together, we need to educate athletes, as well as society as a whole, on the importance of good nutrition and living a healthy, active life.”

Among Sidhu’s other goals is to constantly try to improve and master her sport. “I enjoy the process of training and improving more than the actual victory,” she says. “I never let my achievements make me complacent. My attitude has helped me to get to where I am today. It’s an attitude that will hopefully allow me to enjoy every moment at the world games in Rio and win multiple medals.” 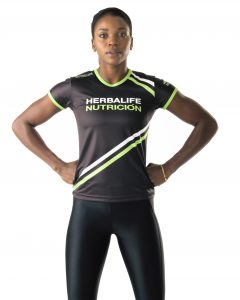 Former track-and-field champion Jackie Joyner-Kersey once said, “It’s better to look ahead and prepare than to look back and regret.” Regret will hardly be an issue for Herbalife-sponsored high jump, long jump and triple jump competitor Caterine Ibargüen, who prepares herself with such dedication that she recently qualified for the 2016 world games in Rio de Janeiro.

Rising to the Challenge

Born in Apartado, Colombia, Ibargüen started her sports career at the age of 12, instantly standing out in the 150-meter category. Driven to train in the jump categories, she won her first international high-jump title in 1999 at the age of 15, when she took third place at the South American Championship in Athletics. Ibargüen has been pushing her limits and winning titles ever since, the most prestigious one being her silver medal at the 2012 world games in London. She considers that event both the best and worst day of her life because even though she did her country proud, “I had my sights set on winning gold,” she says. In Rio, she will once again get a chance to win gold and have her best day. To do so, she’s putting her focus on nutrition.

Ibargüen points out that competing in the jump categories is particularly demanding and requires specialized nutrition. “My nutritional needs are highly focused in the areas of energy and weight maintenance,” she says. “Because the Herbalife24® line is designed specifically for athletes, it goes a long way toward meeting my needs.” Herbalife24® products are also an ideal choice for Ibargüen because they are tested by the National Sanitation Foundation (NSF) International, an independent, accredited organization. The NSF Certified for Sport® marking on certain Herbalife® products ensures that they have been tested clean of athletic banned substances and verified that they meet label claims and contaminant test criteria.

The Sky’s the Limit

At the moment, Ibargüen is hard at work training for the 2016 world games in Rio de Janeiro, for which she recently qualified in the triple jump category. “I’m honored to be competing for my fans and my country at this incredible event,” she says. “I want to make everyone who has supported me proud.”

Herbalife will support more than 40 athletes from 15 countries training to compete on the world’s stage this summer.

“Sports and encouraging a healthy, active lifestyle are a key part of our overall mission and we are honored to sponsor several National Olympic Committees and dozens of athletes,” said Michael O. Johnson, chairman and CEO, Herbalife.

*Results may very from person to person